Book an Appointment
Read Our Blog
All Blog Post
5 Best Tips to Help You Mentally Prepare for Weight-Loss Surgery
5 Signs You May Need Gallbladder Surgery
7 Ways Men Can Prevent a Hernia As They Age
Acid-reflux Causes, Diagnosis, and Treatment Options
Advantages of Weight Loss Surgery
Am I a Candidate for Anti-Reflux Surgery?
Am I a Candidate for Gastrectomy?
Testimonials
More Testimonials
Dear Dr. Reiner, I would like to thank you for your surgical care of my daughter. As you know , she is the joy of my life and the thought that I might lose her was too much for me to handle. Your surgical expertise and timely diagnosis made her well and brought her home to me. I found it so assuring the way you explained the situation, always answering all my questions with honesty and patience. Your warmth and caring for my daughter and my family will never be forgotten.

Dear Dr Reiner, What a good man you are ! We want you to know how grateful we are for fitting in our old frail father so quickly and being so accommodating on all levels. We feel incredibly lucky to have a father in our hands. You have given us, his children, peace of mind knowing that you’re the best doctor to get him best odds for an easy recovery. Thank you , Thank you , for being not only an incredible doctor but also an exceptionally generous and caring human being.

Dr. Jacob, Thanks very much for an excellent procedure. From start to finish your staff was great. The pre- and post op nurses were excellent, and they even pushed me in a wheelchair to the parking garage! The anesthesiologist was excellent too… Thanks again for the professional service from all

At Laparoscopic Surgical Center of New York, our skilled, highly-experienced surgeons can help eliminate the sour, burning symptoms of gastroesophageal reflux disease (GERD). Whether you are suffering from a mild, moderate, or severe case of the disease, our doctors can perform anti-reflux surgery at their New York, NY, office to eliminate the causes.

What Causes the Burning Sensation?

When you eat food, it travels from your mouth to your stomach through a long tube called the esophagus. At the end of the esophagus is a small ring of muscle called the lower esophageal sphincter (LES), which acts as a one-way valve.

This small valve allows food to enter into the stomach. However, if the valve does not function properly and fails to close, the stomach acids can travel back up into the esophagus, causing chronic coughing, chest pain, and painful heartburn.

If left untreated, GERD can progress into more than just periodic pain and burning sensations. Over time, the stomach acids can begin to injure the sensitive lining in the esophagus. This could result in bleeding or the creation of cancerous cells.

Some patients may be able to improve the symptoms of GERD through a series of lifestyle changes and drug therapy. However, patients who do not respond well to these alternate therapies may be a good candidate for a surgical procedure called fundoplication, or laparoscopic anti-reflux surgery. Our surgical team is highly experienced in performing this minimally invasive surgery. 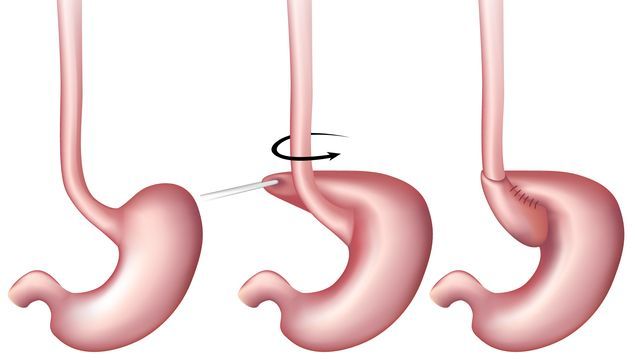 During fundoplication, your surgeon will make several small incisions, roughly five to 10 millimeters in size along the abdomen to allow access to your hiatal hernia, stomach, and esophagus. A small camera will be inserted, called a scope, through the incisions to help guide the surgeon.

The LES will be recreated by wrapping the upper part of the stomach around the end of the esophagus. By recreating the LES, acids will not be able to burn and reverse into the esophagus, This surgery allows the esophagus to heal, strengthening the valve that connects the stomach and esophagus.

Most patients will require a hospital stay for one to three days after their surgery. Prior to being released, we will provide you with a series of diet and activity guidelines. Typically, patients are instructed to only drink water on the night following the surgery, progressing to other clear liquids the next day. Soft foods can typically be consumed for the first few days, and within three to four days patients can gradually begin to eat solid foods.

A follow-up appointment is scheduled one week after your surgery to assess the wound site and your recovery. During this time, we will also provide you with additional information on the type of activities and dietary guidelines that will lead to a quick and successful recovery.

If left untreated, GERD can progress into more than just periodic pain and burning sensations. Over time, the stomach acids can injure the sensitive lining in the esophagus. This could result in bleeding or the creation of cancerous cells. To learn more about laparoscopic surgery and how it can eliminate acid-reflux, schedule your consultation.